How to Customize Google Text-to-Speech Voices

Although Google is increasingly focusing more and more on Google Assistant, yet Text-to-speech (TTS) still remains an important aspect of Android devices. The TTS accessibility feature is used to read texts from your Android device and convert it to audio. By default, you will hear a female voice at a fixed pitch and speed. Moreover, language is always set to English. But unknown to many, you could modify all of these settings. Or you could even ditch Google’s TTS service and use a third-party app from Play Store. Let’s see how this could be done. Moreover, you may take the help of the Speaki app to read notifications on your Android device.

Most of the Android device comes pre-installed with the TTS service. However, if that’s not the case with your device, make sure to install Google’s TTS service before proceeding further. Once installed, you may access this feature by following the below steps:

Now that you have reached the TTS feature, let’s have a look at how to customize the Google Text-to-Speech voices and it’s associated settings.

Speech Rate refers to the speed at which the narrator speaks. You may increase or decrease this rate simply by sliding the Speech rate toggle. Moreover, if the pitch rate of the voice is placed too high (or too low), adjust accordingly using the Pitch slider. Once you have made your decision regarding the speech rate and pitch, you could try out the same by tapping the Play button. Or you may reset them to the default settings with the help of the Reset option.

To convert any word, phrase or emoji into speech with Pronounce app for Android, take the help of our guide.

Here language refers to the narrator’s language in which she would speak the written texts on your device. By default, the language is set to the device’s system language. To change the language, just tap on the Language option inside the Text-to-speech output screen. Now choose the desired language from the list. But you wouldn’t find all the languages here. To add more languages, refer to the instructions given in the next section.

You may even use the ReadItToMe app to give voice to your instant messaging apps like WhatsApp and Telegram.

You may also change the voice from male to female or vice versa. Plus, each language further has close to 15 different types of voices. you may play each one of them before making a final choice. To do so, head over to the Text-to-speech option and tap on the Settings icon. Now go to Install voice data and tap on the language of which you wish to change the settings of.  You may choose from around 15-16 different voices, both male and female voices. Just make the selection and press the back button, the changes will automatically be saved.

However, to convert WhatsApp voice messages to texts, refer to our guide on the same. 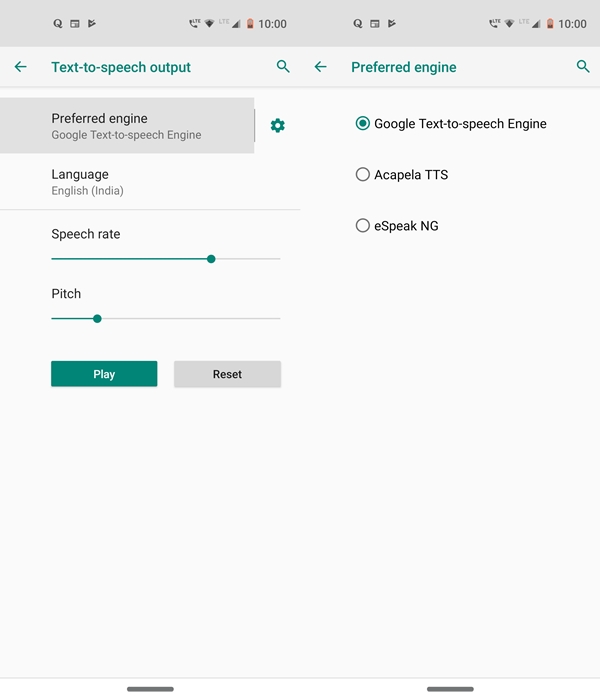 Google’s Text-to-speech engine is set as the default speech engine in many Android devices. Most of the Samsung devices, however, comes with its own TTS service as well, apart from the one provided by Google. No matter which device you use, it has the option of adding more third party TTS. Some of the available ones include Acapela TTS Voices and eSpeak TTS. once you have installed the desired TTS engine, head over to Text-to-speech feature under the Accessibility menu. Then tap on the Preferred engine option, and subsequently select the desired TTs engine from there.

You may further customize the Text-to-speech option by tapping on the Settings icon. The option includes the ability to download the languages only over WiFi or amplify speech volume. Amplifying the speech makes the voice louder than others. It will make the TTS voice easier to listen if other sounds (like music) are concurrently playing on your device. You may also make the voice’s intonation more expressive or even pitch flat by tapping on the Intonation feature and choosing the desired option.

So these were the various tweaks related to Google’s Text-to-speech software. Once you have made all the desired tweaks related to TTS, don’t forget to hit the Play button before finalizing the settings. Moreover, do share your views on this feature down in the comments section below.

Read next: How to Disable TalkBack on Android Devices